The rebranding of Agatha Christie is continuing with the much-hyped launch of Partners in Crime on BBC1 on Sunday. I’ll withhold judgment on the show itself until after the event, but for now would like to welcome the renewed interest in Tommy and Tuppence. The Beresfords, as they become, are among Christie’s least-known detective heroes, and traditionally critical consensus has been that they belong in the dustbin to which they’ve been consigned. My pet theory here is that this is down to two things: our cultural fear of strong women and the disproportionate impact of television adaptations on Agatha Christie scholarship.

But why are Tommy and Tuppence worth our time? Here are some thoughts. 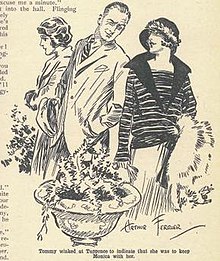 For her second novel as a hot new topic, Agatha Christie could have penned another Poirot adventure. It’s what the public expected and wanted. But instead she wrote The Secret Adversary (1922), in which Tommy Beresford and Prudence (Tuppence) Cowley interact as peers, finally agreeing to marry. Bored after the war, they set up a detective agency and are soon enmeshed in espionage. Hearing parts of this summary, or just the names of the sleuths, many people assume that Tommy and Tuppence are two men – I recently found an illustrated guide to detective fiction which features an image of two moustachioed chaps, subtitlted ‘Tommy and Tuppence.’ When Christie wrote about this couple, she was treading virgin soil.

More than this, though, their partnership is their methodology. Not only do they share distinctive qualities that make them, combined, a superior detective, but it is also being in a relationship that helps them solve crimes. A criminal tries to lull Tommy into a trap with a convincing note signed ‘Twopence,’ and Tommy’s recognition of the spelling error makes a bigger point about the completely individual knowledge that comes in a relationship, ungraspable to the rest of the world.

Couples who investigate crimes together are quite common now in books and on television (always heterosexual, but one step at a time). Many of their creators, including Val McDermid, acknowledge their debt to Christie and the Beresfords. And even in the Golden Age, other writers tried to build courtship elements into their narratives. But sleuthing duos like Sayers’ Peter Wimsey and Harriet Vane, or Allingham’s Albert Campion and Amanda Fitton could hardly be called equals. In all of these stories (and I am including McDermid’s, alongside Silent Witness and others), the male partner does the main job while his partner is simperingly supportive or airily intuitive.

Tommy and Tuppence stand almost alone because they are one another’s equals (there are others, most notably Dashiell Hammett’s Nick and Norah Charles). Their banter and repartee may not be massively endearing to today’s readers but there is still clearly mileage in the uniqueness of their set-up.

Many people don’t realise that Agatha Christie was a parodist. Each of the short stories that make up Partners in Crime (1929), the second Tommy and Tuppence book, is a parody of one of Christie’s predecessors or contemporaries. In one, Tommy decides to be Sherlock Holmes; in another, Tuppence decides to be Inspector French, and so on. They share the fun, just as they share the role of kidnapee, and that of victor; Tommy solves six cases and Tuppence solves six and they solve the final case together. The pair even parodies Hercule Poirot, recognising his then-current serial, The Big Four (1927 [both TB4 and PiC were serialised in 1925] as a literary production. At the same time they are meeting Inspector Japp, Poirot’s friend who appears in The Big Four. The gesture provides a strange kind of intertextuality that pre-empts the common practices of some postmodernists.

As our intrepid sleuths pursue their rather mundane marriage they also face more espionage than your typical Christie (or golden age) sleuth. This is certainly the case in the first four of the five Tommy and Tuppence books (and the fifth is best forgotten). The couple faces plots from communists, socialists, and fascists, although notably they tend to unmask respectable middle-aged English people as criminal masterminds. As indicated above, their relationship is woven into the fabric of the investigations; indeed, in N or M? (1941), by which point the Beresfords have adult children, a criminal hides behind the mask of motherhood indicating that when you sleuth from a position within the conventional family unit you know that it is not sacred. Sinister plots that would otherwise stay hidden and trusted are uncovered.

Christie thought that she would be targeted by Hitler because of N or M?, which dealt with fifth columnists and codebreaking. In fact, she was investigated by MI5. As chance would have it, the novel features an self-important character called Major Bletchley, who claimed to know all the enemies’ secrets, and there were some concerns that she might have rumbled Bletchley Park.

The final reason to applaud the Beresfords is because Tommy is one of our first ginger heroes. Yes, he is described as red-headed, freckled, and ‘pleasantly ugly.’ Tuppence, a clergyman’s daughter, is also plain in looks – both of them are attractive in their plainness and their energy, and being of equal ages and equally mediocre in their intelligence. I think that the couple’s unremarkableness is part of why they haven’t translated well to the screen, which has tended to give them the glam treatment.