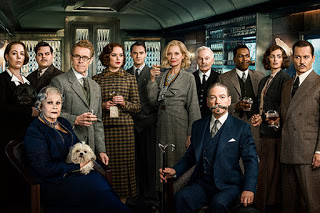 This is a duplicate of the post at https://signofthecrimes.blogspot.co.uk/2017/11/murder-on-orient-express-20th-century.html

I’m lucky enough to be married to the most understanding person in the world. Alan didn’t mind when I described the Murder on the Orient Express release day as ‘the happiest day of my life’; Alan spent about three hours travelling to and from the cinema despite coming straight from work; and Alan happily allowed me to garner judgey looks from passers-by as I tried to take the perfect selfie next to a cardboard Poirot. So, Alan is pretty cool. Or, as a nurse might say, accepting.
And yesterday meant a great deal to me. Kenneth Branagh’s new film adaptation of Murder on the Orient Express is the first English-language Agatha Christie movie in my lifetime. Like Taylor Swift, I was born in late 1989 (there the comparisons end), and the last Christie movie in English was Ten Little Indians, earlier in that year. Believe it or not, I got through school, college, and even the first year of university encountering only a handful of peers who’d even heard of Christie or Poirot. And I genuinely think that’s a lot less likely to happen to a young reader now. It means a lot that Christie and Poirot are back on the silver screen.

Sir Ken’s turn as director-star has been panned in early reviews: in the Times, the Guardian, the Telegraph, and by nearly all my friends who’ve seen it. The expression ‘The Orient Express has run out of steam!’ is almost as common now as ‘he truly was the People’s Pope’ in 2005. Branagh is weird as Poirot, say the reviewers, with a terrible accent, too much macho action, and a travesty of a moustache. His direction, they say, is ludicrous, with big aerial shots that distract from the actual detail of the scenes. And the final criticism that’s coming up a lot concerns the legendary cast, including Michelle Pfeiffer, Johnny Depp, Judi Dench, Daisy Ridley, Derek Jacobi, Olivia Colman, Josh Gadd, some attractive male ballet dancer who can’t act, and loads of other celebrities I’ve already forgotten. ‘No one gets enough screen time!’ cry disgruntled commentators. ‘I came for Pfieffer/Depp/Dench/the attractive male ballet dancer who can’t act, and s/he was barely on the screen because of all the other celebrities!’

While these are legitimate criticisms, I don’t agree with any of them. I actually loved Branagh’s fresh interpretation of Hercule Poirot, a much-visited character. He plays Poirot as a troubled, lonely man with an outrageous ego — and that is very much in thebooks. Of course, Branagh’s Poirot is not exactly like Christie’s petite detective with the egg-shaped head and a bourgeois approach to — well, everything. But it’s no more different than David Suchet’s interpretation, and a lot more respectful to the source material than Albert Finney’s, Peter Ustinov’s, Tony Randall’s, Alfred Molina’s, or Austin Trevor’s — and of those, the first two undeniably gave wonderful performances.

Branagh’s Poirot gets most of his dialogue directly from three books: Murder on the Orient Express (1934), The Labours of Hercules (1947), and Curtain (1975) and, more than any other portrayal, it’s an authentic one. The accent is less Frenchy than in previous manifestations; there’s a bit of Flemish in there, because he’s supposed to be Belgian. I have no idea if it’s any good but it sounded fine to me. For the first time in cinematic history, Hercule Poirot is not the most ridiculous character in the drama. He’s a flawed but brilliant man in the middle of an insane social masquerade.

Branagh acheives this partly by having Poirot’s prissiness — his OCD as he measures the sizes of eggs, and his dainty way of eating a cake — become essential parts of his character. These are things that make up his unique psychological profile, as they do in Christie’s books, rather than being little quirks to garnish the character (Suchet learnt the mannerisms brilliantly but never did anything to justify them; they became a simple signature). That’s brilliant.

And let’s talk about Branagh’s moustache. It’s magnificent and ludicrous. It’s meant to be. As it is in the books, after all. You know how every now and then in The Simpsons, someone asks Marge why she has hair that is quite that tall and quite that blue? The same thing happens all the time in Poirot’s world: why is he making such a statement with his huge, neat, and dramatic moustache? Agatha Christie loved the 1974 version of Murder on the Orient Express but, famously, her main criticism was of the detective’s lip-hair.  ‘I wrote that he had the finest moustache in England’, she said, ‘and he didn’t in the film. I thought that a pity — why shouldn’t he?’ It strikes me as criticism taken fully on board this time around.

Why don’t people like Branagh’s Poiorot, then? I suspect it’s simply because he isn’t David Suchet. His is a very different interpretation — but, I think, a lot more interesting. Suchet learnt the mannerisms and then rewrote the character to work out some kind of religious guilt, all the while donning a tiny moustache that I’ve always thought Agatha Christie would have hated. He gave a brilliant but imperfect performance — and that’s also what Branagh has done. I don’t visualise Suchet when I read the books, and I’m not going to start visualising Branagh. But if I wanted to see an actor, rather than to imagine the character in a unique and personal way, I’d watch films or television instead of reading in the first place.

That said, the goatee needs to go. Fox is using the moustache to garner lots of attention, and has even partnered with Movember this year.

The direction in this film surprised me. When Branagh was announced as the director attached to the project (back in the days when Depp was being rumoured for the role of HP), I was pleased. He’s not a good director, but he can do flash, he can boast over lavish sets and crank up colour filters and basically revel in style over substance. Remember Hamlet and Much Ado About Nothing? Both technically awful but sumptuous and beautiful. And, based on the 1974 version of Orient Express, with its panoramic shots and its equal claim to star power (the tagline was ‘The Who’s Who of the Whodunit!’), I figured the new film would be much in that vein — and that Branagh would be perfect to direct it.

So I was surprised and utterly thrilled to see the subject matter sensitively treated. A huge concern in this film is the distinction between good and evil — something that fascinated Agatha Christie throughout her career. After all, the victim in Murder on the Orient Express is described in the book as ‘tangibl[y] evil’, the backstory is based on a real case of child-murder, and the solution … well, even if you’re of the ultra-conservative ‘it’s just a puzzle!’ school, you can’t deny that the solution and how Poirot deals with it both have something to say about social justice and criminal justice. Unlike Sidney Lumet in 1974, Branagh in 2017 tackles these themes head on. From the opening scene, in which Poirot rounds up a priest, a rabbi, and an imam, then explains that the chief of police is framing them all for a crime, to the revelation of whodunit, with the suspects lined up in a parody of the Last Supper, there is an ambitious and sensitive focus.

And this is why it’s so interesting. Because the film could so easily have been flashy and panoramic, with each superstar actor having an Oscar-bidding five minutes, but instead it’s ended up a real ensemble effort, in which the story comes first. The film has the star power of the 1974 version but more substance, and the ethical urgency of the ITV version but more fun. And it goes without saying that it’s better than the 2001 US TV travesty starring Alfred Molina.

Speaking of the story, the writers have injected some action and a tiny bit of violence, clearly afraid swimming in stagnant waters with a crime-interviews-solution format. This is understandable, but I also see why so many people are cross that, for instance, Poirot chases a suspect down scaffolding, gets shot at twice, and uses his cane like an action man. There is also a second stabbing, which isn’t in the book. However, silly as these may sound,  I don’t think they take anything away — and Poirot’s action is never out of character. That, I think, is crucial. He’s a man who does what he has to do, and he prefers to sit still and think, but sometimes that isn’t possible.

However… a note of caution. Because the writers are clearly so palpably afraid of getting boring, some things are sacrificed — such as major plot points. There is some confusion over a few key clues. This is hard to discuss without giving away the solution, but there are several red herrings. They are laid for very specific reasons — but Poirot never explains why. Instead they just exist and are then forgotten. Again, I can’t go into details, but if you know the story, keep an eye out for explanations surrounding the governess and the embroidered handkerchief. Because neither of these is properly explained.

There’s also an incredibly silly scene where Poirot has tea with Mary Debenham outside in the middle of a snowdrift. The idea is to break up the monotony of interior scenes, clearly, but they sit outside in the snow, and occasionally their hair changes colour because of the green screen. There’s a teapot between them, but neither drinks from it. Partly because — I imagine — the tea would have frozen(?!) but also because there are no teacups! It’s all very uncalled for.

None of this stopped me enjoying it, as someone who already knew the story very well. Judging by the annoying people who sat behind us in the cinema, it’s also extremely enjoyable if you don’t know the plot (or who Michelle Pfeiffer is, or what a rabbi is, or whether the Orient Express was a real train… there was very nearly a Murder at the Picturehouse).  For a while now it’s been an open secret that Branagh wants to do Death on the Nile next, and this is directly hinted in the funny final scene of Murder on the Orient Express.  Wallander fell through as Sir Kenneth’s retirement project, and he’s keeping an eye on how Orient Express fares. I hope it does well at the box office, if not critically, because I’d dearly love the franchise to continue.